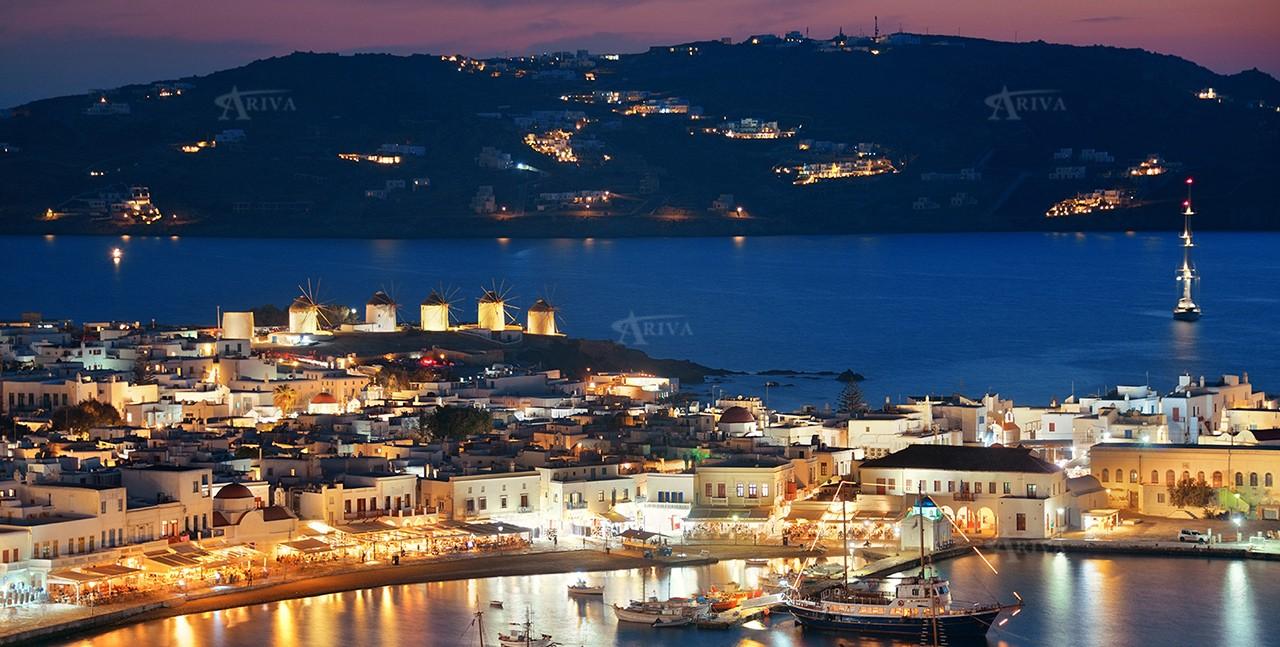 Yacht Cruise Guides to Destinations around the Mykonos Island

Mythology says that Mykonos was made from the petrified bodies of victim of Hercules, each one a giant. Its name comes from the grandson of Apollo and visitors today will see a beautiful island filled with whitewashed houses with colourful doors and windows, set against the various blues of the sky and the sea. If you book a Luxury yacht charter with us, we can introduce you to one of the most cosmopolitan of the Greek Islands.

In the summer time, its temporary population can include everything from students and backpackers to the rich and famous. We can introduce you to this broad mix on a yacht charter vacation.

Many towns on Greek Islands look like an amphitheatre facing the sea; not so Mykonos’ capital that has spread over a greater area. There is nothing different about its streets, narrow with a predominance of marble and beautiful bougainvillea. There are lovely small churches that are almost hidden away. One thing that is not hidden is the castle above the harbour while the museums, folklore, maritime and archaeological offer so much to tourists wishing to know more about Mykonos.

Petros the Pelican became famous on Mykonos. He was rescued in a storm in 1954 and after his death, the locals ensured that he was replaced. When you take a yacht charter with us, the chances of a storm are virtually nil because the weather in the long months from spring until winter returns remains predictable; warm to hot with very pleasant nights.

Yacht charter holidays offer plenty of flexibility. We have some standard itineraries which we have devised over the years. In addition, if you make an enquiry on behalf of a group wanting to book a charter yacht in total, we can discuss an itinerary with you. On Mykonos, the coastline offers so much. There is “Little Venice” which came into being in the 18th Century. Stunning mansions overlook the sea while traditional windmills are also evident on the slopes.

There are plenty of nice beaches. In your yacht, you can seek out quiet ones away from any crowds. There are some that are very family friendly, and others where parties seem to be ‘’order of the day.’’ You can sail on if you want a relaxing time; it is a great advantage in a luxury yacht charter holiday.

One of Mykonos’ nicknames is ‘’Island of the Winds’’ and that means it is great for surfers and sailors while the clear water makes it a great place for divers.

When you are on Mykonos it would be a shame not to go to the sacred island of Delos which is very close. Don’t worry because we can arrange for you to sail to the mythological home of Apollo and Artemis. Because it is sacred, no mortals can be born or die there. We would love to show you more of this tiny island while visiting Mykonos. Get in touch and we will talk to make it possible.

The Town is typical of the region; whitewashed houses with coloured doors, narrow streets, chapels and churches and purple bougainvillea. There is no traffic in the centre of town most of the time, and always at night as people head for bars and restaurants. The church complex of Panagia Paraportiani is a national cultural monument and is an excellent example of Cycladic architecture. They sit on the hill of the old Venetian castle and the views of the island and sea from on high are stunning. ‘’Little Venice’’ is one of the nicest neighbourhoods, situated on a small peninsula while Mykonos is known for its windmills.

Kalafatis beach with trees for shade and lovely blue waters is 12 kms east of Mykonos Town. It is the most popular tourist area with hotels and restaurants. It is the place for those who are looking for an active holiday with better beaches for those just wanting to relax. Windsurfers will love this, especially when the wind blows. Other water sports available are canoeing and jet skiing. There is a diving school and the chance to sail to nearby Drakonissi and explore its caves.

Few places have a bigger role in mythology than the tiny island of Delos just off Mykonos and all holidaymakers should take the short boat ride to see the home of Apollo and Artemis. Delos is regarded as a sacred island where no mortal could ever be born or die. The historical content of Delos comes from different ages in antiquity; it does not need a museum because the Island is almost a museum in itself. It was an important island for both religion and for trade. The highlights of the ruins that all date from the centuries BC include the amphitheatre that has a capacity of 5,000 and the Temple of Apollo. https://whc.unesco.org/en/list/530

Greek is the language on Mykonos with English understood in tourist areas.

Mykonos’ currency is the Euro

Mykonos is one hour behind the UK.

Fly to: Mykonos has its own airport with charter flights from around Europe throughout the tourist season. Flight time from the UK is 4 hours.

Berths at Mykonos Town must be booked in advance. There are good facilities for repair and maintenance as well as nearby shops and restaurants.

Mykonos is among the best-known places in Greece, famous for its cosmopolitan atmosphere, stunning architecture and of course its nightlife. It is included in many popular yachting itineraries around the Cyclades Group of Islands. ‘’Little Venice’’, so called because of the Venetian architecture, and the beaches are popular places to spend your time on the island. 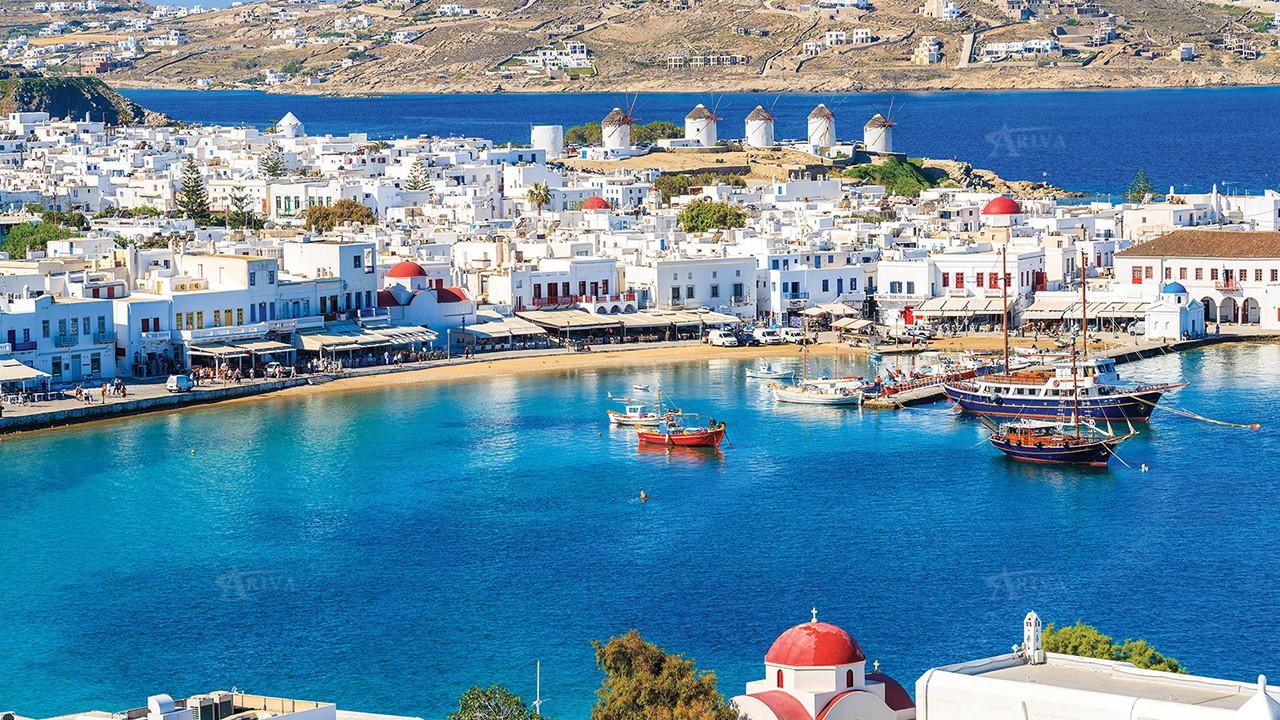 AIAXAIA
All Yachts for Charter
Call Us Online Free
NEED HELP ?
We welcomes your enquires, questions, comments suggestions, compliments, and complaints as one critical way to continuously improve our services to you.
Call with Browser Free or Request Call by Phone
Do You Prefer Chat?
Live Chat
WhatsApp
Facebook
ENQUIRY FORM
Close