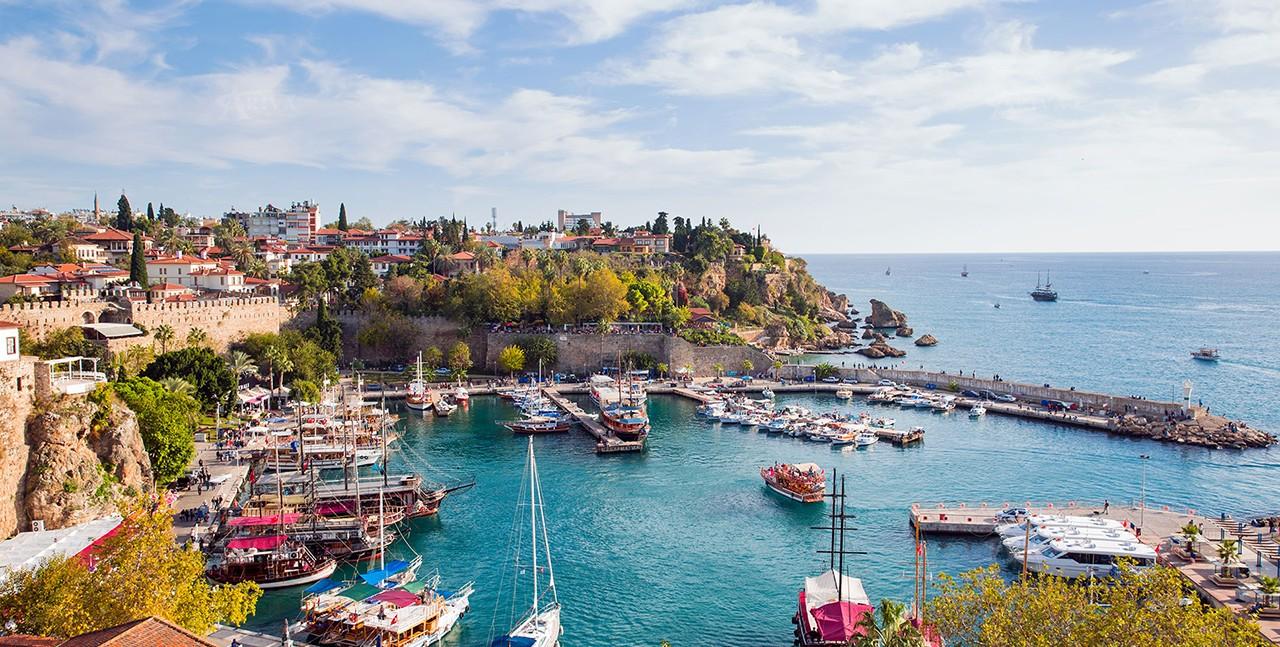 Yacht Cruise Guides to Destinations around the Antalya

If there is one place on the Turquoise Coast that welcomes significant tourist numbers all year round, it is Antalya. A city of over 1 million inhabitants, it has a rich history and the infrastructure you would expect of a modern city. Ariva Yachting does not offer yacht vacations all year round but the season is still very long. It begins in the spring and lasts until winter arrives and we are happy to explain to you the many things that can be included in a luxury yacht charter that starts in Antalya.

We have a number of departure points for our yacht charters and certainly Antalya offers plenty for clients that decide on the easternmost departure point that we offer.

If you head west, there are several attractions, historical, environmental and even mythical that you are certain to enjoy. There is the supposed home of Santa Claus, an eternal flame shooting out of rocks and a sunken city which still reveals some fine detail after it slipped into the sea. Read on to learn more.

The tourist town of Kemer with its marina has grown in recent years; it was a mere village but is now a town of approaching 20,000 people. It used to rely on fishing but the economy is now firmly based on tourism. It is not far west of Antalya and at one time it was only really accessible from the sea. These days a modern road hugs the coastline for many kilometres. Kemer is a great place for restocking with fresh fruit and vegetables.

Further on there is Mount Chimera which was mentioned in Ancient Greek writings; a flame emerges from the rock and burns constantly, with no apparent fuel source. It has seemingly done so for many centuries. It is worth anchoring close by overnight because it is clearly more impressive after the sun sets. Imagine yourself with a cold beer or glass of wine, relaxing on deck and watching the sun set. That creates many colour changes and then the flames dominate the setting. The crew will be preparing your dinner as you enjoy the scene.

There are plenty of places along this stunning coastline to anchor in fact; small coves and beaches with some great places for diving as well.

Your yacht charter itinerary is likely to include the ruins of Paselis and Olympus. The first evidence of settlement is the 4th Century BC and its history is Lycian, Greek and Roman with Julius Caesar seemingly there in his early days as a soldier in 78BC.

Myra was thought to be the home of Saint Nicholas, (Santa Claus) and the ruins of this ancient Lycian City are close to the modern town of Demre. It is another place to stop for a while, as is the sunken city of Kekova and Simena Castle from which the views over the surrounding sea are stunning.

Your yacht charter may then proceed to Kas, a small town with a new marina and a place that is fast becoming one of the top dive sites in Turkey. Kas sits below the Taurus Mountains that reach down to the sea the whole length of this cruise. They reach well above 2,000 metres in some parts so the whole setting is stunning. There is actually the easternmost island of the Dodecanese just offshore from Kas. Meis has a lovely harbour, and is an impressive rock with typical Greek architecture, a museum and even an airport on the top. At one time it had a population of several thousand but it mostly moved off the Island during World War II. Many settled in Australia and today the population is just a few hundred.

We are happy to respond to enquiries about Antalya. You may be considering it because of the plentiful flights coming into its international airport. Please feel free to ask as many questions as you like. If you intend to come as a group and book a whole yacht, you can ask for a bespoke itinerary and we will devise one that takes time and distances into account. You may have some dietary requirements and we are happy to cater for them as well.

Kaleici is rich in history. The Hadrianus Gate and impressive walls are just the beginning. There are narrow cobbled streets, traditionally built Ottoman houses, Saat Kulesi from similar times and the 18th Century Pasa Cammi Mosque. Antalya’s history is behind these Roman walls.

The ancient city of Perge just east of Antalya offers tourists interested in history some lovely Roman ruins, dated at around 1000 BC. The hippodrome and theatre are still fairly intact while it is easy to imagine the past when you look at the bathhouses. The stadium was one of the largest in Asia Minor; it was thought to seat 12,000 spectators.

Only rarely do the world’s waterfalls drop into the sea but Duden Falls do just that, water hurtling down 40 metres into the Sea just east of Antalya. You can see them on land or take the yacht along the coast just a very short distance. There are falls higher up the river but still very close to the City but it is the water falling into the Sea that attracts most visitors.

The weather in South West Turkey is predictable; it will be warm as the yachting season starts and hot through the many weeks of summer. It cools a little in the autumn but is still pleasantly warm. Night time temperatures are still good enough for T shirt and shorts throughout the yachting season.

The local language is Turkish which may initially be confusing but if you learn a few commonly used phrases such as greetings, locals will appreciate your efforts. You will find English spoken in many tourist places and restaurants will have English as well as Turkish.

The local currency is the Turkish Lira (TL). You will find many places where exchange rates are clearly shown and can get Lira from ATMs which are common. Travellers cheques are not advisable.

Turkish time is 2 hours ahead of the UK from the end of March until UK clocks change in October. For a period of 5 months, the winter, clocks will currently be 3 hours ahead though that policy is not necessarily permanent.

Fly to: Antalya International Airport is one of the largest in Turkey with flights throughout Europe and the Middle East. It is 20 minutes from Antalya City Centre. Flight times from the UK average 4.5 hours.

Setur Marina is located behind a breakwater in the commercial harbour in the extreme west end of the City. It can hold 235 yachts with a further 150 on land. Yachts up to 90 metres long can be catered for with the water between 4 and 6 metres deep. Repair and maintenance services are on site.

Kaleici Marina is the ancient harbour dating back many, many centuries. It is a small area at the bottom of the Old Town where boats are able to sail out into the blue and calm waters throughout the yachting season.

ARESTEAS
All Yachts for Charter
Call Us Online Free
NEED HELP ?
We welcomes your enquires, questions, comments suggestions, compliments, and complaints as one critical way to continuously improve our services to you.
Call with Browser Free or Request Call by Phone
Do You Prefer Chat?
Live Chat
WhatsApp
Facebook
ENQUIRY FORM
Close